Jonathan Butler Records “Rivers Of Babylon” For A Good Cause 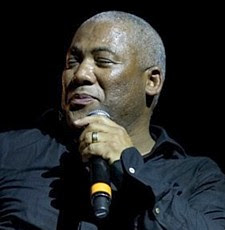 Several other smooth jazz artists donated their time, creativity and musical skills to create the music.

The CD features new covers of original songs and is produced by Jeff Babko and Dan Lutz. Highlights include saxophonist Kirk Whalum, bassist Nathan East and vocalist Raul Midon on Sting’s “Love Is the Seventh Wave”; Queen Latifah on “River”; Whalum, East and guitarist Larry Carlton on “Wade in the Water”; and Whalum on “The Water Is Wide.”

Sales of the album will be used to build wells in communities across the world that do not have access to clean water. 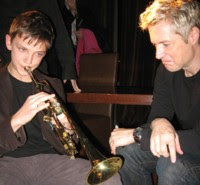 Last year, Chris Botti says he met an incredible young man and fellow trumpeter named Simon at a show in Krakow, Poland. Botti recently received news that Simon was in an car accident and is severely injured.

Botti says Simon is now recovering at a hospital but could use any words of encouragement to help lift his spirits. “I’ve created a post in the forum section of my website with the hopes that all the other fans out there can send good wishes his way,” Botti says.

Botti has now released 10 solo albums including his latest, Live In Boston.

His tour continues Saturday (April 10) in Winston-Salem, NC, and Monday (April 12) in Vancouver, BC. Both shows feature orchestras.

Unique Museum In Phoenix Will Have George Benson Exhibit

A new museum in Phoenix, which opens on April 24 and bills itself as the world’s first global musical instrument museum, will have an exhibit featuring guitarist and vocalist George Benson. Benson, a native of Pittsburgh, now lives in the Phoenix area.

The Music Instrument Museum (The MIM) will host an exhibit on Benson’s most iconic album, Breezin.’ It will have the Gibson Johnny Smith guitar Benson used to record the album, as well as sheet music, the Best Pop Instrumental Performance Grammy award, the Triple Platinum plaque (more than 3 million sold) and the 1976 Billboard Award. In addition, Benson’s 2009 National Endowment of the Arts Jazz Masters plaque will be on display.

In 2008, an permanent exhibit opened at the Heinz History Center in Pittsburgh that features Benson’s music. It’s part of the Crawford Grill exhibit, which replicates one of Pittsburgh’s premier jazz clubs.

Benson’s latest CD, Songs and Stories, features the smooth jazz hits “Living in High Definition” and “Nuthin’ But a Party.”

At all of Standring’s shows with the string section, members come from the community. Upcoming shows include Friday (April 9) in Seal Beach, Calif., July 1-3 in London; Aug. 7 in Laguna Beach, Calif.; and Oct. 9 at the Catalina Island JazzTrax Festival in Southern California.

Seventeen-time Grammy Award-winning guitarist Pat Metheny begins the U.S. portion of his Orchestrion tour on Tuesday (April 6), and will be featured later in the month in a rare television profile. Orchestrion, the name of Metheny’s latest CD, is a generic name for a machine that plays music and is designed to sound like an orchestra or band.

In addition, Metheny has teamed up with world-renowned speaker company Martin Logan to offer fans a chance to win a pair of Purity loudspeakers and an IPod filled with a collection of Metheny’s most popular tracks. The giveaway, on now, continues through April 30. You can find out more information at the Martin Logan website.

Metheny is also looking for passionate fans who want to be part of his street team to spread the word on his Orchestrion project. Members can help by sending ecards, putting up posters and coming up with creative ways to spread the word. From now until May 1, Methney is hosting a Street Team contest to see who can be the best promoter of an upcoming Orchestrion show. You can get more information at patmetheny.com. 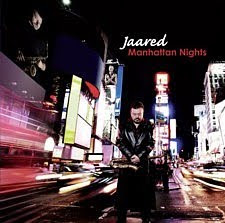 Manhattan Nights is produced by Michael B and features guitarists Jay Soto and Tim Bowman, saxophonist Cindy Bradley and trumpeter Greg Adams. The 14-song CD features titles such as “If You Know What I Mean,” “That’s What She Said,” “Dancing With You” and “Coolsville.”

Another song, “Always Together,” is the Feedback Track this weekend on the Smooth Jazz Top 20.

Jaared has numerous shows planned for the year. To find out more, go to his Website.

Brian Culbertson’s “XII” To Be Released In July

There’s a reason why smooth jazz musician Brian Culbertson is calling his upcoming CD XII. The number “12” is significant to the keyboardist.

It’s his 12th album, including nine studio CDs, a Christmas CD, and last year’s DVD/CD Live From the Inside. XII will have 12 songs. Culbertson was born on January 12. He’s been married to his wife, Michelle, for 12 years. There are 12 notes to a scale. At 12, Culbertson knew he wanted to be a musician, and that year was introduced to MIDI synthesizers and computers. And Culbertson says every address where he’s lived has had 1s and 2s in it, including 1120, 1220 and 211. His dorm room in college was 210.

XII will be released on July 20. To keep up on its progress, go to Culbertson’s YouTube channel.

“It has been my ambition for many years to record an album with an orchestra,” says Standring, who adds that the project is extremely cinematic but will still resonate with his many smooth jazz fans. “I also wanted to take a major left turn musically on this album, and as soon as I started messing around with orchestral samples, the drive to realize this project became much bigger than me.”

The CD features the hit single “Bossa Blue,” which makes its debut this weekend on the Smooth Jazz Top 20. Among the 13 other tracks include “Please Mind the Gap,” “Sensual Overload,” “Fast Train to Everywhere” and “Lost in Angles.”

Standring is now offering a free download of “Bossa Blue” on his website. Fans can also order the CD on the site as part of several packages, which includes autographed copies, signed photos, music scores and bonus tracks.