World-renowned guitarist John McLaughlin, is set to begin his first U.S. tour in three years. The tour begins on June 11th in Durham, NC and will hit Asheville, DC, Bethlehem, Boston and a 3-night stand in New York City at the Blue Note before ending in Toronto on June 23rd. McLaughlin and his legendary 4th Dimension band will also make a special appearance at this year’s Bonnaroo Festival in Manchester, Tennessee on June 14th

After celebrating his 70th birthday year, McLaughlin upped-the-ante even further with greater fire, finesse and free-wheeling interplay on his latest studio recording, Now Here This (Abstract Logix), released last October with The 4th Dimension on board to support the critically praised album. Beginning the European-leg in late October, the month-long tour hit romantic locales such as France and Switzerland, with Poland, Germany, the UK and Russia following close behind. Later, McLaughlin touched down in such far flung locations as Belarus and Siberia, ending with shows in Finland, Norway and Italy. The reviews were amazing, with Jazzwise publication saying “John McLaughlin celebrates his 70th birthday year with a bang by releasing his most explosive new album since the early days of the Mahavishnu Orchestra.”

There is little doubt that McLaughlin's return to the electrified fusion he first innovated over 40 years ago in groups led by trumpet icon Miles Davis and drum legend Tony Williams - and, of course, with his own earth-shattering Mahavishnu Orchestra - is as electrifying and exhilarating as ever.

Christian McBride Lays Down Roots
At 40, the gifted and ubiquitous bassist mentors an impressive new generation At age 40, Christian McBride ranks among the most supremely gifted bassists in jazz. Throughout his prolific career, he has stood for a particular vision of excellence, deeply grounded in both the jazz tradition and a more generalized philosophy of groove. He hasn’t been a purist, but neither has he forgotten his root system. He won’t let you forget it, either.

Christian McBride has a simple but functional metaphor for the jazz continuum, one that he can rattle off with all the persuasive ease of a pocket sermon. “I view the tradition as being like the roots of a tree,” he said one afternoon this winter, at his home in Montclair, N.J. “But you can’t just have the roots. Something’s got to grow out of that: different branches, leaves, the tree’s going to get taller.”

One thing he technically leaves unsaid, probably because it’s obvious, is that a tree is a living organism. Another thing: It can stay alive only as long as those roots remain. Read more at JazzTimes.com Guitarist John Scofield has announced the release of his new album, Überjam Deux, July 2 on Decca/Emarcy.

According to a press release from the label, “Überjam Deux has been a decade in the works, following 2002’s Grammy-nominated Überjam. The recording features Avi Bortnick (guitar and samples), Andy Hess (bass), Adam Deitch (drums), Louis Cato (drums) and special guest John Medeski (organ, Wurlitzer and Mellotron on six tracks).

Scofield and the Überjam Band (Hess, Bortnick, Tony Mason) will embark on a tour June 21. Dates are as follows:

Sting to Release 'The Last Ship' on Sept. 24

Sting has announced he'll release an album consisting of all-new music entitled The Last Ship on September 24 via Cherrytree/Interscope/A&M. The Grammy-winning singer-songwriter has been working on a new musical for the past three years, also entitled The Last Ship. Set in Wallsend, England, where the real life Gordon Sumner grew up, the story is based on a homecoming framed around the declining shipbuilding business. Producers hope to bring the show to Broadway in 2014. The Last Ship is Sting's first album of new material since 2003's Sacred Love and contains several songs used in the musical, in addition to titles that did not make the play. Sting is currently in the midst of his Back to Bass 2013 tour with his next performances scheduled at the Ravinia Festival in Chicago, IL June 7-8. A full list of his tour dates is available here.

Japanese pianist-composer Keiko Matsui is celebrating her 25th anniversary in the music business with the release of her 24th album entitled Soul Quest on July 30 via Shanachie Records. Matsui worked with guitarist-producer Chuck Loeb on several of the tracks on the album. Keiko originally studied classical music before turning to jazz. She names artists like Stevie Wonder and Chick Corea as major influences on her music. Keiko plans to host a CD release party and show at Yoshi's in Oakland, CA on August 21-22. You can check out her new single "Black Lion" here.

Tia Fuller, The Three Bs and Hidden Orchestra for Edinburgh

The 35th annual Edinburgh Jazz and Blues Festival, which runs between 19-28 July at venues across the city, mixes up new names, tradition, and innovation with a line up which includes fast rising saxophonist Tia Fuller (pictured), The Three Bs (Chris Barber, Acker Bilk and Keith Ball) in tribute to Kenny Ball, Jools Holland’s R&B Orchestra, plus the new Cross the Tracks strand featuring the beat-laden trip hop of Hidden Orchestra and Mercury nominated rapper Ghostpoet.

This year’s festival also includes Dinah Washington influenced singer/pianist Champian Fulton, and the Edinburgh Jazz Festival Orchestra performing works from Duke Ellington’s Sacred Concerts, while Muddy Water’s centenary is marked with a special concert featuring his eldest son, Mud Morganfield. The jazz festival also gets the city’s ‘festival season’ underway, bringing jazz to the streets and parks of Edinburgh for the Mardi Gras on Saturday 20 July and the second ever Edinburgh Festival Carnival on Sunday 21 July.

Dave Holland back with Prism and Royal Academy residency

Revered bassist Dave Holland is set to make a dramatic return to the fray with a fired-up new quartet and album both under the name Prism, featuring a hard-hitting combination of keyboardist Craig Taborn, guitarist Kevin Eubanks and drummer Eric Harland (all pictured left). Holland’s album is his first for Sony’s newly revived OKeh label, and a preview listen of the album confirms it to be his most visceral recording for many years, recalling the uncompromising onslaught of his work with Miles in 1970, and his own Extensions band in the late 1980s, and features Eubanks’ distortion-laden guitar and Taborn’s twisted Rhodes leading the charge.

The nine-track set concludes with a stunning ballad, ‘Breathe’, which features a sensitive piano intro from Taborn. The band makes their UK debut later this year over two unmissable nights at Ronnie Scott’s on 2-3 November. Holland is also set to be International Artist In Residence at the Royal Academy of Music for the next two years, and among various visits will work with Academy students for a full week in early 2014, including a performance in the Academy’s Sir Jack Lyons Theatre on 22 January. 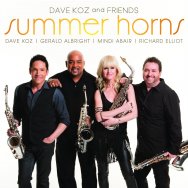 Saxophonist Dave Koz turns up the heat with a little help from his friends: Gerald Albright, Richard Elliot and Mindi Abair

Eight-time Grammy nominee Dave Koz remembers a time when the summers lasted forever, and the most popular rock, R&B, soul and funk bands of the day were propelled by high-octane, richly arranged horn sections. Indeed, from the late 1960s through the 70s, bands like Sly & the Family Stone, Tower of Power, Earth Wind & Fire, Chicago, Blood Sweat & Tears and other brassy juggernauts of the era ruled the airwaves and opened his young ears to the saxophone's limitless possibilities as a solo instrument as well as a collaborative voice with the trumpet and trombon.

"There are a lot of levels to this album," says Koz. "There's tremendous musicianship, and there's a lot of thought that went into the arrangements. But by the same token, it's primarily meant to make the listener feel good. These are songs of a certain era, and if you are of a certain age, you're going to listen to them and immediately recognize them. It's meant to remind you of a time when that sound was everywhere. This was our chance to honor that era of great horn sections with a big tip of our hat and say ‘thank you' to those who were responsible for it. I hope people feel the reverence that we all have for this music and the great bands that made it."

Out of devastating pain comes Dreamweaver from keyboardist/composer... 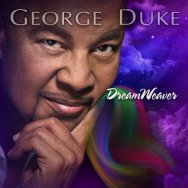 New disc set for release July 16, 2013 on Heads Up International. Out of devastating pain comes DreamWeaver, the new disc, which Grammy Award-winning keyboardist/composer/arranger/
producer George Duke considers his most honest album in several years. The making of DreamWeaver occurred after his wife, Corine, passed away. Struck with grief, he found it difficult to work during that period. "I didnít feel like creating any music, which was odd, because normally that 's the easiest thing for me to do," he says, "Sometimes, I would walk into the studio and say, Nah. It's not going to happen."

The scope of keyboardist-composer-producer George Duke’s imprint on jazz and pop music over the past forty years is almost impossible to calculate. He has collaborated with some of the most prominent figures in the industry. A producer since the 1980s, he has crafted scores of fine recordings – many of them GRAMMY winners – for artists representing almost every corner of the contemporary American music landscape.