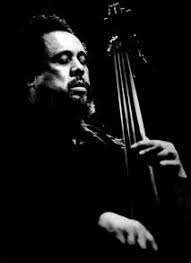 Charles Mingus, Jr. was born on April 22, 1922 in Nogales, Arizona on a military base and raised in Watts, California. Charles first became interested and exposed to music through the church and when he was eight he heard Duke Ellington on the radio for the first time. Mingus began learning music on trombone and later cello. Charles later studied bass formally with H Rheinshagen from the New York Philharmonic and studied composition with Lloyd Reese. By the time Mingus was in his teens he was already composing advanced pieces that would be considered in the 'third stream' movement of Jazz. Charles later recorded these early compositions in 1960 with Gunther Schuller and called the album 'Pre-Bird'. Mingus quickly created a name for himself in Jazz and in the 1940s toured with Louis Armstrong, Russell Jacquet, Howard McGhee and Lionel Hampton. In the early 1950s Charles joined the New York scene and performed with Charlie Parker who was a major influence for Mingus. During this period Charles also played with Miles Davis, Bud Powell, Max Roach, Art Tatum and Duke Ellington. Also in the '50s Mingus formed his own publishing and recording company with Max Roach to document and protect his music. The most notable album on Debut Records from this period is the 'Massey Hall' concert with Dizzy Gillespie, Charlie Parker, Bud Powell and Max Roach.
Mingus pursued one of his visions around this time called the 'Jazz Workshop' which enabled musicians to come together and support each other in testing their limits and pushing ahead to new ground in Jazz. These groups
led to Mingus developing the sound we know him for today and some of the musicians who played in the Jazz Workshop were Pepper Adams, Jaki Byard, Booker Ervin, John Handy, Jimmy Knepper, Charles McPherson and Horace Parlan. In the late '50s and into the 1960s Mingus began releasing albums as a leader at an
incredible pace especially considering the originality in all of his music. Charles began with 'Pithecanthropus Erectus' in 1956 with Mal Waldron, Jackie Mclean and J. R. Monterose followed by 'The Clown' in 1957. In 1959 Mingus released three of his most legendary albums; 'Blues and Roots', 'Mingus Ah Um' and 'Mingus Dynasty'. In 1960 he recorded 'Charles Mingus Presents Charles Mingus' with Eric Dolphy, Dannie Richmond and Ted Curson. Incredible music kept flowing from Mingus and he recorded 'The Black Saint and the Sinner Lady' in 1963 which is considered a masterpiece and one of greatest works of arranging and orchestration in Jazz history. Also is '63 Mingus showed us his skills on the piano with the album 'Mingus Plays Piano' which features only Charles playing solo piano.
Charles was a warrior for civil rights and his music reflects his willingness to put himself out there for what he believed in. Mingus’ tune ‘Fables of Faubus’ best demonstrates his willingness to call it as he sees it and if you search the song title on Jazz On The Tube you can hear the version of this song with words by Charles as well. In the late 1960s and early ‘70s Charles’ incredible pace slowed just a little bit but the music didn’t stop. In 1971 Mingus was awarded the Slee Chair of Music and spent a semester teaching at the State University of New York at Buffalo. Also in ’71 his autobiography was published entitled ‘Beneath the Underdog’. In 1974 he formed a
band with Richmond, Don Pullen, Jack Walrath and George Adams and they recorded the albums ‘Changes One’ and ‘Changes Two’. During the mid 1970’s Mingus also toured Europe, Asia, South America and America until he developed a rare nerve disease in 1977. Even though Charles could no longer play after this, he still composed by singing tunes into a tape recorder, showing his love and determination to create. Charles Mingus passed away in 1979 and his ashes were scattered in the Ganges River in India. Both New York City and Washington D.C.
honored him after his passing with a “Charles Mingus Day”
Charles Mingus recorded over 100 albums and wrote over 300 scores in his life and leaves a legacy as one of greatest composers in American history and certainly in the history of Jazz. Some of the awards Mingus has received include being inducted into the Down Beat Hall of Fame, Grammy Lifetime Achievement Award, his album
‘Mingus Dynasty’ was inducted into the Grammy Hall of Fame, the U.S. Postal Service issued a stamp in his honor, and the National Endowment of the Arts provided grants for a nonprofit called “Let My Children Hear Music” in which
they cataloged all of Mingus’ works and made them available at the New York Public Library. Charles Mingus was a genius, a Jazz master, a warrior for civil rights and in my humble opinion a true American hero.

“Making the simple
complicated is commonplace; making the complicated simple, awesomely simple, that's creativity.”
"In other words I am three. One man stands forever in the middle, unconcerned, unmoved, watching, waiting to be allowed to express what he sees to the other two.
The second man is like a frightened animal that attacks for fear of being attacked. Then there's an over-loving gentle
person who lets people into the uttermost sacred temple of his being and he'll take insults and be trusting and sign contracts without reading them and get talked down to working cheap or for nothing, and when he realizes what's been done to him he feels like killing and destroying everything around him including himself for being so stupid. But he can't - he goes back inside himself.
Which one is real?
They're all real." – Charles Mingus