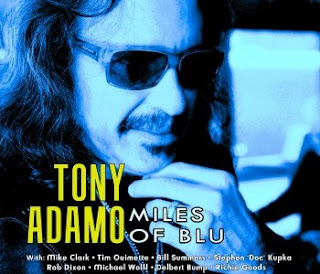 As the business and cultural landscape of improvisational music has evolved over the last year or two I am starting to notice a slight trend toward the inclusion of poetry and spoken word passages on some recordings and with incredibly mixed results. Tony Adamo is releasing a spoken word recording or "beatnik jazz" that is way outside my personal wheelhouse but when you toss in drummer Mike Clark, pianist Michael Wolf and horn ace Stephen "Doc" Kupka you end up with the next generation of hip. Sort of a deconstructed Miles Davis Birth Of The Cool amped up to the new millennium. Adamo is much in the same way as Miles, a visionary.
Tony's unique vision has opened up yet another sub genre on the jazz family tree being commonly referred to as "HipSpokenWord." Personally I like "Beatnik Jazz" better but to each his own. Jazz / funk drummer Mike Clark is the producer and lends his prolific talents to help elevate Adamo's game to the next level. When you have the former musical director for Arsenio Hall in Michael Wolf and Tower of Power veteran "Doc" Kupka then you know people are indeed buying what you are selling. Adamo's words are powerful, topical and guaranteed to make you think while expanding your musical horizons into a well defined poetry for the culture today.
"JB" kicks off and pays tribute to the hardest working man in show business while "America R We Free?" is a more personal statement involving the p.o.v of America being built on the blood sweat and tears of the middle class. While not necessarily agreeing with Adamo's politics, I would be the first to applaud his fearlessness in putting himself "out there." A former editor would often caution me on gratuitous self references but whether you are a writer or a vocal artist, a shared perspective is just that and what the audience chooses to do or make of it is strictly up to them. "Sun-Ra Rockets To Mars" has a more ambient vibe and spatial integrity reinforced by the relentless groove of producer Clark.
With the exception of only a handful of traditional rap artists, most creative vocalists are lacking the substance and stamina to put an entire recording on their backs in an effort to either spread their message, music or both. Tony Adamo makes it look effortless and with a virtual all star line up he gains the freedom to let his imagination soar. Sometimes stepping outside your musical comfort zone is a good thing and Tony Adamo makes it an enlightening experience!
4 Stars for creativity and ingenuity alone!
Tracks: JB; Miles Of Blu; Funkin' At The Chickn Shack; America R We Free?; BBQ; The Power Of Funky Madness; Soul Vacation; Don't Change Horses; Ain't That A Groove?"; Jack Kerouac, Jack!; Sun-Ra Rockets To Mars; What Is Hip?" The Other Side Of Time; Ticking Clock.
Personnel: Tony Adamo: vocals, hipspokenword; Mike Clark: drums; Tim Ouimette: trumpet / trombone; Bill Harris: bari / alto / tenor sax; Richie Goods: bass; Delbert Bump: organ; Steve Homan: guitar; Gary Mielke: bass / keyboards; Rob Dixon: tenor / alto sax; Derrick Gardner: trumpet; Stephen "Doc" Kupka: bari sax; Brett Palm: bass; Bill Summers: percussion; Kati Mac: background vocals; Tom Guarna: guitar; Michael Wolf: piano